Okay – I am back. For real this time. Finally completing my last post seems to have opened a levy in my mind and I am writing like crazy, so get ready to be sick of me. Today I decided that I have had it with New York City and all of its shenanigans.   I have mentioned before that New York and I have a serious Love – Hate relationship. Today it is hate, as it has been for the past few weeks.  I know it will turn around again soon, since it always does.  I have spent my whole life here and some days I just need to look myself in the mirror and ask why – today is one of those days. To be fair there is a lot to love about New York as well and I do not sell any of that short, but to me New York’s best places and events are seen when you take the city as a whole. That includes 5 Boroughs, three of which are often overlooked – plus Staten Island which nobody likes and we keep trying to give to New Jersey. Seriously though, I may rant now but look forward to a counter-list of why this city is amazing in the near future. So I present you with – 5 Reasons I am Over New York City… Right Now

There are MILLIONS (Literally) of people here.  The number of people commuting around the most metropolitan areas swells during the work day with commuters and tourist alike. Personal space is nearly nonexistent as there is always multiple people surrounding you on every side.  Fancy a bit of quiet time on your lunch break? Well, too bad. There will always be a creepy tweaking bum asking you for money/cigarettes/food/beer/etc.  There will always be people shouting, car horns blaring, sirens squealing, children crying, and just a general haze of all-encompassing noise at all times of the day and night. That picture above? That is a real picture taken during NYC rush hour.  This is just one or two subway trains worth of people who needed to get to 42nd street. This is not the worst I have seen, with my own eyes, during rush hour. There are constantly people pushing, shoving, sneezing, squeezing, sweating or worse literally inches from you. And you know what, it is exhausting! You have to fight your way through a crowd of people for literally everything. Would you like a cup of coffee from Starbucks down the block – be prepared to fight crowds going, coming and while inside.  Having a street to yourself (or nearly empty) creates a feeling akin to Christmas morning. You just want to scream, “Air! Real fresh air!! I can walk without being fondled! I can set my own pace without being sent crowd surfing!!”  It’s the little things in life. Furthermore there are times the absence of a crowd is even more alarming than the presence of one. Such as on a Subway car.

Again, I ask that you take a minute to really look at this picture. It’s a real picture, taken in a NYC Subway, with a cell phone. That person is not wearing pants. Notice the many empty seats around them. I guarantee this person smells like unwashed swamp-ass combined with week old Indian food. As I have already described to you the horrors of continuously being in a large crowd – I will express to you the most horrifying of subway experiences – The Empty Subway Car. Particularly terrifying during rush hour, when all cars are the kind of crowded nightmares are made of. Do not be fooled into thinking you’re in luck when an empty car stops in front of you – trust me here that your face in a tourists sweaty armpit is better than getting on the car of death as it will most certainly smell like a decaying carcass covered in horse manure.  However, it would be thoughtless of me to only describe the horrendous smell of the subway since there are delights for all the senses. As you stand waiting for a train that will come whenever it damn-well pleases take notice of balmy urine scented air. Just standing there touching nothing will make you feel the imminent need to shower. Then when the train does finally arrive you will fight for a seat – provided that you get one it is inevitable that at some point during your commute the person next to you will either try to save your soul, have no respect for personal boundaries, smell terrible, talk to themselves continuously or some other version of this hell.  You will put in your headphones or possibly take out a book to read but as soon as you do there will be a group of guys much louder than your iPod standing next to you offering sub par subway performances while one of them literally shoves a hat in your face begging for change. I hope you weren’t in a rush to get someplace, like work maybe, because the quicker you need the trip to go the slower it will. Yes, we did just spend 35 minutes in between stops for absolutely no acceptable reason. Oh Sorry this train is going out of service because the conductor has to take a crap, please disembark and wait anywhere from 5 to 55 minutes for its replacement – Thank you for riding with the MTA. When this train comes throngs on people board an already crowded car and you are moved into it against your will – pushed up against a door by someone who has never heard of deodorant who rapes your olfactory. You see we have come back to crowds, here. They are the bane of New York existence, and they are only made worse by — 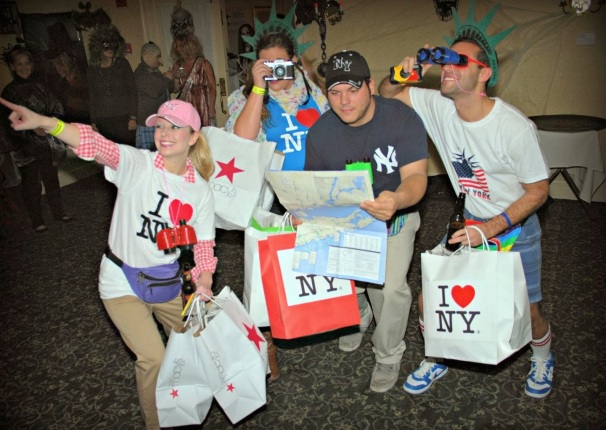 Listen, I understand that New York City is your dream vacation – and I thank you for fueling our economy.  It really is a fascinating place and I’m thrilled by your excitement of the place I call home. Past that, however, I hate you. Please don’t take it personally, but understand that there are a ton of unwritten rules of etiquette here and you are following exactly ZERO of them. Your family of four should not be walking side to side and dominating the entire sidewalk – leave room for traffic to flow around you. Also, do you notice how all these well dressed New Yorker’s are walking on the escalator so that it ESCALATES their speed of travel – yeah, either do that or wait at the end of the line with that 400 lb wheezing guy who also treats this as a ride. You are slowing people down on their way to work or on their way home, and we don’t like to be slowed down.  Furthermore, do not stop abruptly to snap pictures or do a double take of your surroundings, or read your giant map – this is not acceptable. If you traveled here with a large group of people and you think that the middle of 34th Street is the best place for a pre-planning huddle – you’re wrong.  Understand that the sidewalks are our heavily trafficked highways, would you stop your car in the middle of a highway to check the map? Just try to realize that if you’re not keeping pace with the locals than someone may end up blowing their top at you. Maybe just stay in your hotel from 7-9 and 3-6 – that is probably safest.

There is literally nothing moderate about the weather here. The winters are brutally cold and blustery while summer is hot and humid.  The air in the summer feels like a thick blanket being wrapped around you on a hot day. Both the heat and the cold are intensified by the actual layout of New York. The cement absorbs both hot and cold so you are literally surrounded at all times.  The way the buildings line up will perfectly create a wind tunnel of cold summer mornings, however it will also act like a magnifying glass, intensifying the sun on hot summer afternoons.  Spring and Fall are short-lived these days and your lucky to get a month of moderate weather as Summer follows Winter like a shadow. We have already had more than our share of high 80 and 90 degree days and June just began.  Anytime we get some clips of nice weather they are usually ruined with “unusual weather”. Hurricanes, tornadoes, monsoons, you know – the usual

I cannot stand the astronomical price of literally everything. A one bedroom apartment for $3,700 is acceptable in Manhattan, but even in Queens which is only number 6 on the list of highest priced places to live rents are still skyrocketing. Gas is near $4 a gallon, I spend hundreds food shopping, and don’t even get me started on cigarette prices. No matter what you may be looking to purchase plan to pay out the nose for it. It’s like living in an overpriced souvenir shop. On top of high-priced item make sure you tack on the absurd taxes. Speaking of taxes – tax season around here is outright painful. I read somewhere recently (don’t remember where) that New York is among the top five highest taxed states. So that’s awesome.

That’s all I have for now, but trust me there will be more in the future. And I really do love New York most days – growing up here is like no place else in the world. Living here has afforded me so many opportunities that wouldn’t have been as accessible elsewhere. However, there will always be days that the overcrowded, overpriced, rainy and tourist infested city just makes me want to scream!!

3 thoughts on “5 Reasons I am Over NYC –Right Now”

Working momma & wife taking the assault course in life and pretending to have it all together.